For centuries, medicine has been one of the most vital professions. Doctors are an integral part of societies today, just as physicians were in the ancient world. How did the people of the past treat illness, injury, and disease? Our History of Medicine video series explores how the ancient cities of Anatolia approached human health.

The Ancient City of Pergamon is home to many important archaeological structures and wonders. But it also has an important place in the history of medicine, as it was home to one of the most important ancient healing complexes of the region.

For centuries, people seeked treatment at Pergamon for their ailments, with therapies including everything from herbs to music. Let’s explore this history together:

A Short History of Pergamon

Pergamon, included in the UNESCO World Heritage List since 2014, is located within the borders of İzmir. Bergama was founded as the capital of the Attalid Dynasty in the Hellenistic Period. Due to its location at the intersection between Europe and the Middle East, the city become an important cultural, scientific and political center. In 133 BC, after the city passed to the Roman Empire, Pergamon became the capital of the Asia Province. It maintained its importance after one of the seven churches of Anatolia was established there during the Byzantine Period. Later, the city was included in the territory of the Ottoman Empire and the Turkish Period began. The city, home to many civilizations throughout history, fascinates its visitors today with its Hellenistic, Roman, Byzantine and Ottoman structures.

Pergamon was built with advanced techniques in the fields of urbanism and architecture, and was converted into a residential area by creating terraces on a steep hill. The city plan of Pergamon is divided into two as the lower and upper city. In the lower city, there are Hera and Demeter sanctuaries, gymnasium, lower agora, houses and many other social structures. The Upper City, also known as the Acropolis, is the area where the royal family and prominent people of the city lived and where the sacred areas were located. One of the prominent structures in the Acropolis is the magnificent Temple of Trajan. It was constructed by using white marble during the Roman Period. The theater in the city, which was one of the steepest in the ancient world, is another architectural structure that is definitely worth seeing with its breathtaking view.

Another feature that makes Pergamon unique is its spectacular library. This library had an incredible collection of 200,000 scrolls, and in 41 BC, Mark Antony gifted this entire collection to Cleopatra. Another must-see building in Bergama is the Red Basilica. This monumental building was built for the Egyptian gods in the 2nd century AD. Later, with the spread of Christianity, the temple was converted into a church and this church became one of the first seven churches in Anatolia. You can see some of the findings excavated in Pergamon today at the Pergamon Museum. 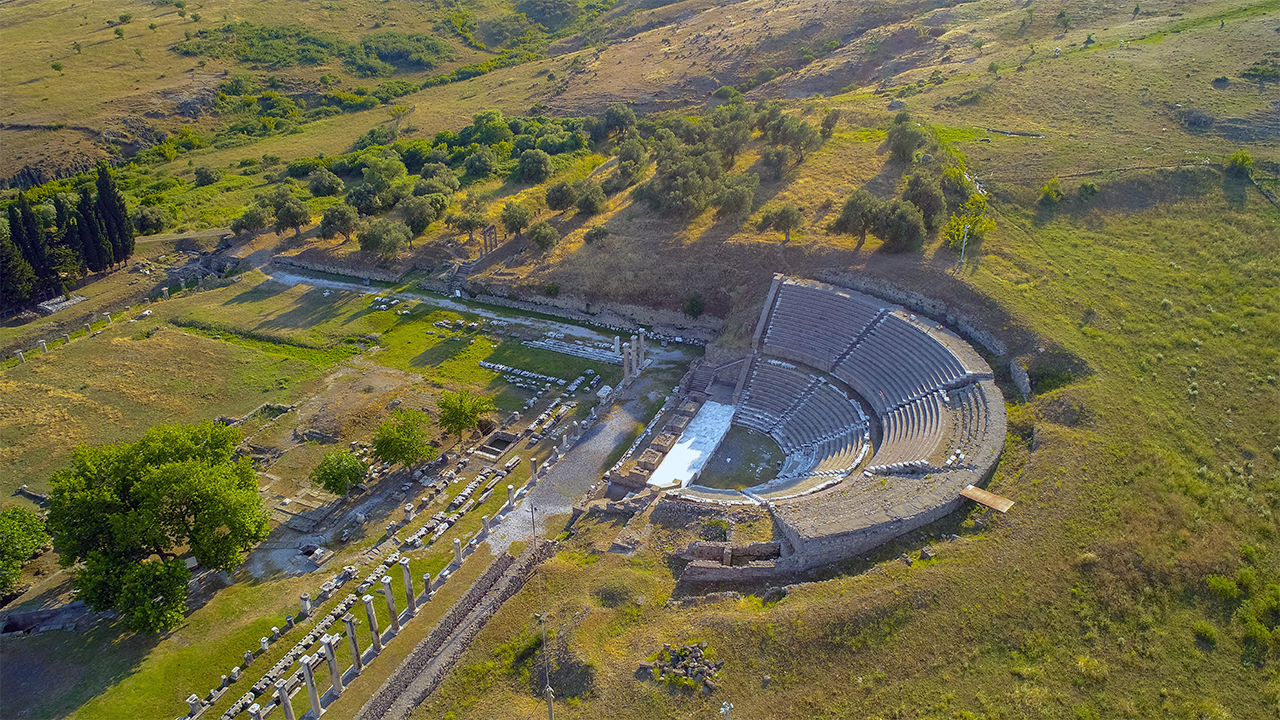 Witnessing various developments in the subjects of science, culture and art since its establishment, Pergamon was also one of the leading centers of medicine in Anatolia. The main reason for that is the Asklepion. This was an ancient treatment center and sanctuary constructed in the name of the god of health, Asklepios.  After visiting Pergamon, you should definitely visit Asklepion, which is located in its immediate vicinity.