The lands of Türkiye were home to many civilizations for centuries due to its geographically strategic location. Therefore, every region of Türkiye is full of unique historical beauties. We have compiled some of the most impressive archeological wonders for you. Let's explore these fascinating locations together!

1- The Megalithic Structures of Göbeklitepe, Şanlıurfa 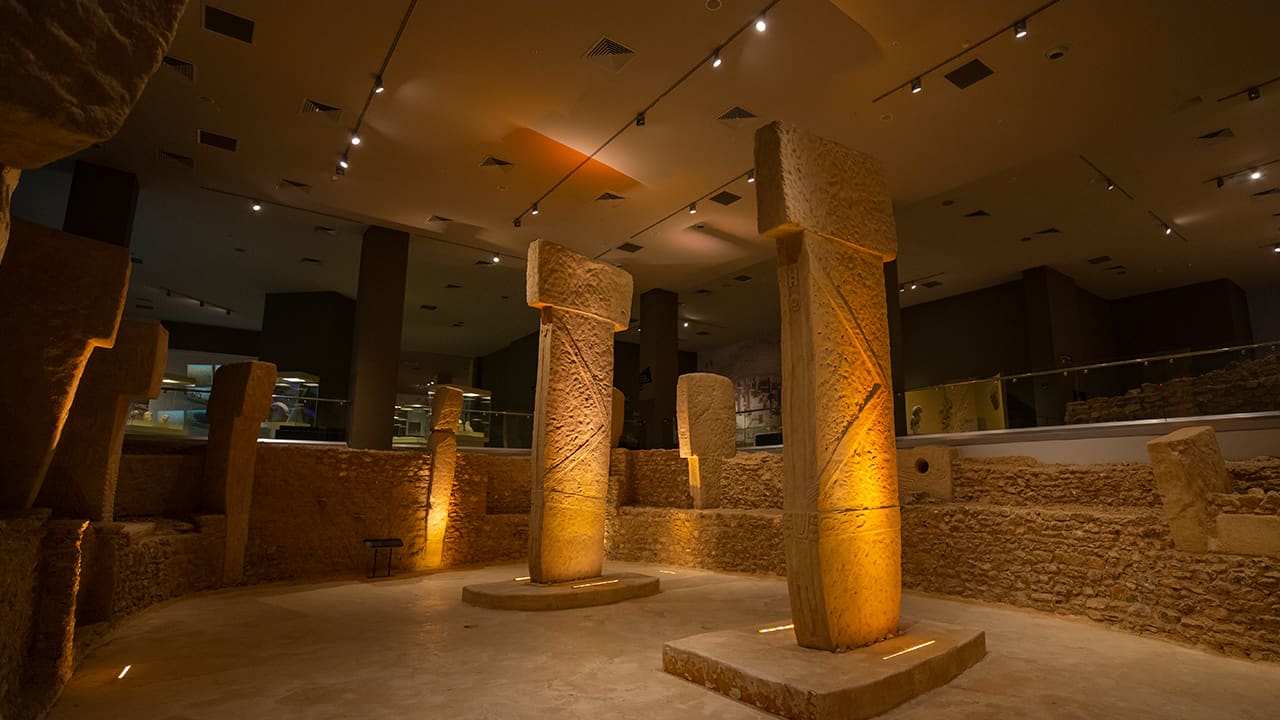 Göbeklitepe is known as the zero point of history. This fascinating historical site located near Şanlıurfa is one of the most important discoveries in the history of archaeology. Göbeklitepe’s location, dimensions, dating, and monumentality of its structures indicate that the site was a unique sanctuary built during the Neolithic Period, 11,600 years ago. It is truly astonishing that people built structures that required such advanced technical and architectural knowledge at a time when they were still living as hunter-gatherers. Some of the most incredible finds in Göbeklitepe are the T-shaped monumental pillars measuring 5 meters in length and 40 tons in weight. Around 10-12 of these mysterious pillars were arranged in a circular plan and were built with stone walls between them. Some of these obelisks have reliefs of animal figures such as snakes, foxes, wild boars, and birds, while some have reliefs of human limbs, such as arms and hands, and are therefore thought to be stylized human figures. There are many more mysteries waiting to be revealed in Göbeklitepe, which was included in the UNESCO World Heritage List in 2018.

Göbeklitepe awaits its visitors with its fascinating structures and impressive archaeological artifacts. You can see various objects excavated from the Göbeklitepe excavation at the Şanlıurfa Museum today. Click here for more information about Göbeklitepe. 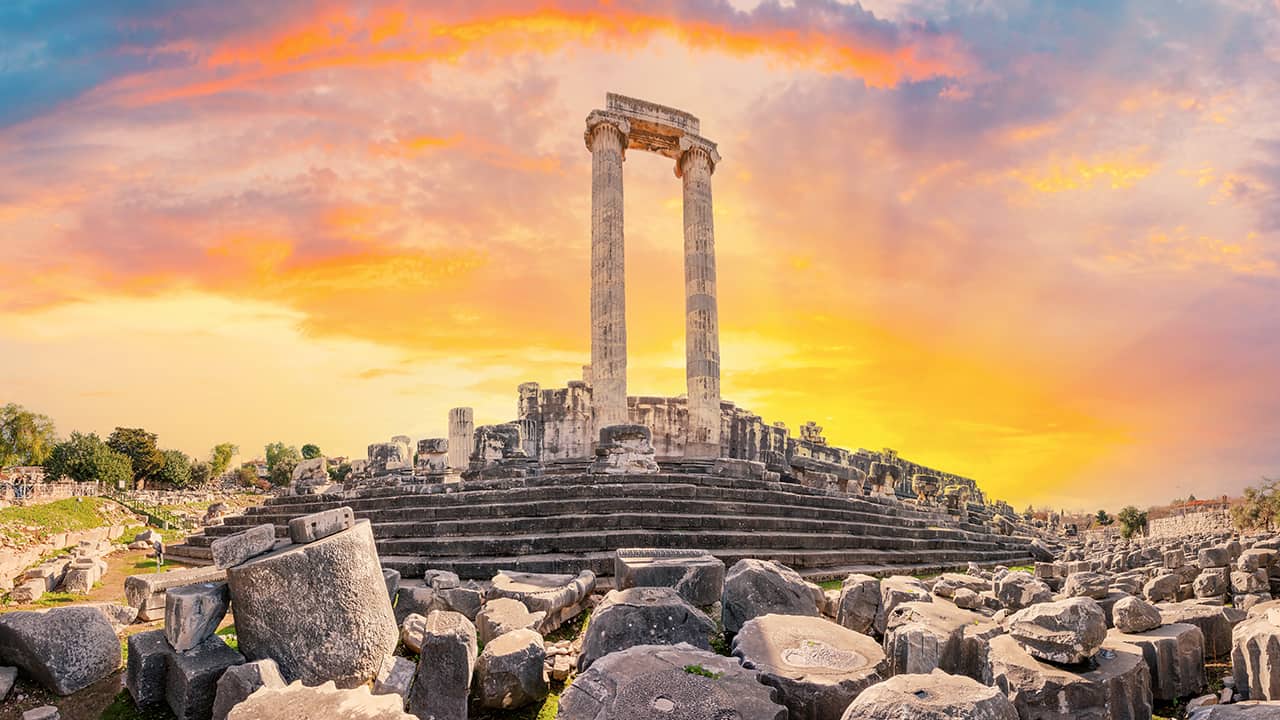 The Temple of Apollo, located on the border of Aydın, was an ancient prophecy center reached by a sacred road from the Ancient City of Miletos. Here, kings and people of all social classes donated gifts to hear prophecies about their future. Visitors from the surrounding settlements would watch the races held in the stadium right next to the temple during the annual celebrations. Many parts of this gigantic temple, approximately 109x51 meters with a column height of 19.5 meters, have survived today. The construction of the building began in the 4th-3rd century BC and was never completed. When you visit this sanctuary, which has witnessed many different periods and civilizations, you may feel small next to the gigantic column structures. And while walking around the Temple of Apollo, you get the feeling that the priests of the ancient period may just walk around the corner at any minute.

In addition to the giant columns, the Medusa heads located at the entrance which are one of the symbols of Didim are also worth seeing. Click here for more information about Didim Apollon Temple. 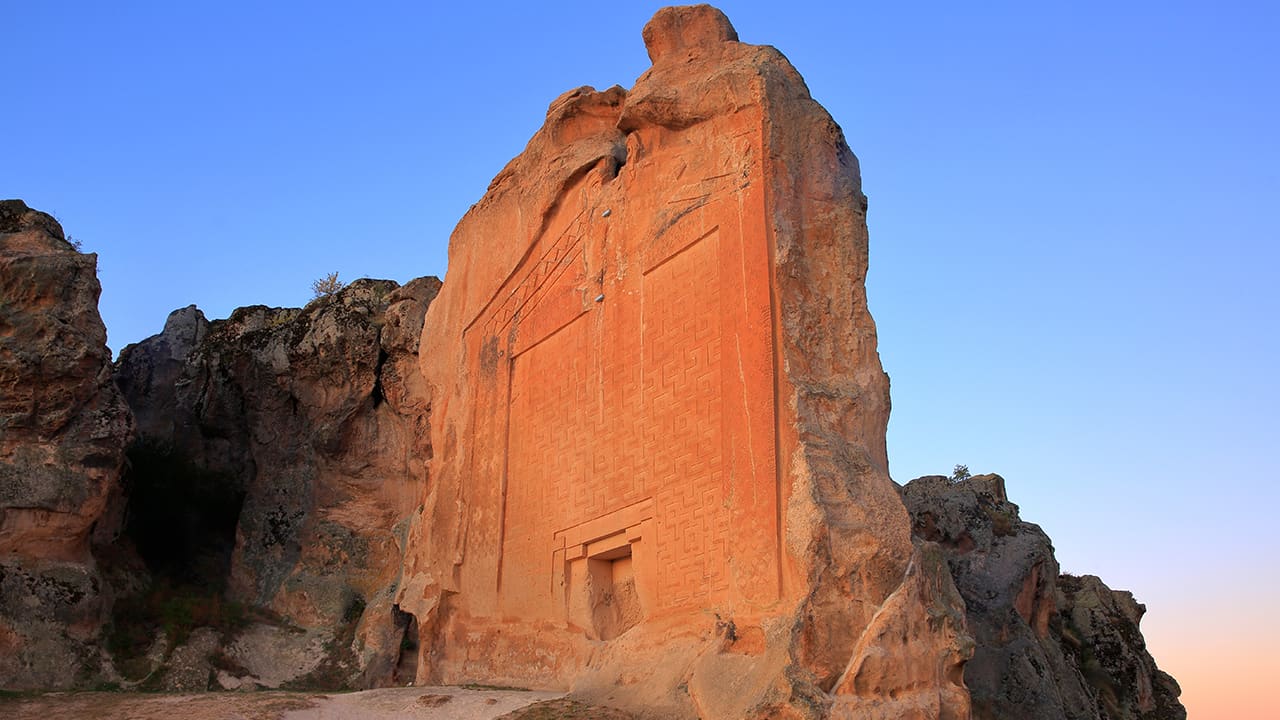 Midas was established in the mountainous Phrygian Region around Eskişehir, at the southern end of Yazılıkaya Valley. The presence of many monumental religious buildings carved into the rocks in the city indicates that this area was a privileged place for the Phrygians. For the Phrygians, the most powerful political capital of the state was Gordion while Midas was the most important religious center. The city was not abandoned after the political collapse of the Phrygian Kingdom and continued to be used during the Persian, Hellenistic, Roman, and Byzantine periods. The most magnificent structure in the region is the Midas Monument. This colossal monument with a height of 17 meters was built in 600 BC. This monument is not a tomb but was designed to place a statue of Kybele (Mother Goddess) in front of it, as seen in many examples of rock monuments in Phrygia. The monument has decorations resembling the façade of a temple.

The places to see in the region are not limited to the Midas Monument and include many monumental altars and a sanctuary. This unique open-air museum is waiting to be discovered by its visitors with its natural and historical gems. Click here for more information about Midas Yazılıkaya Ruins. 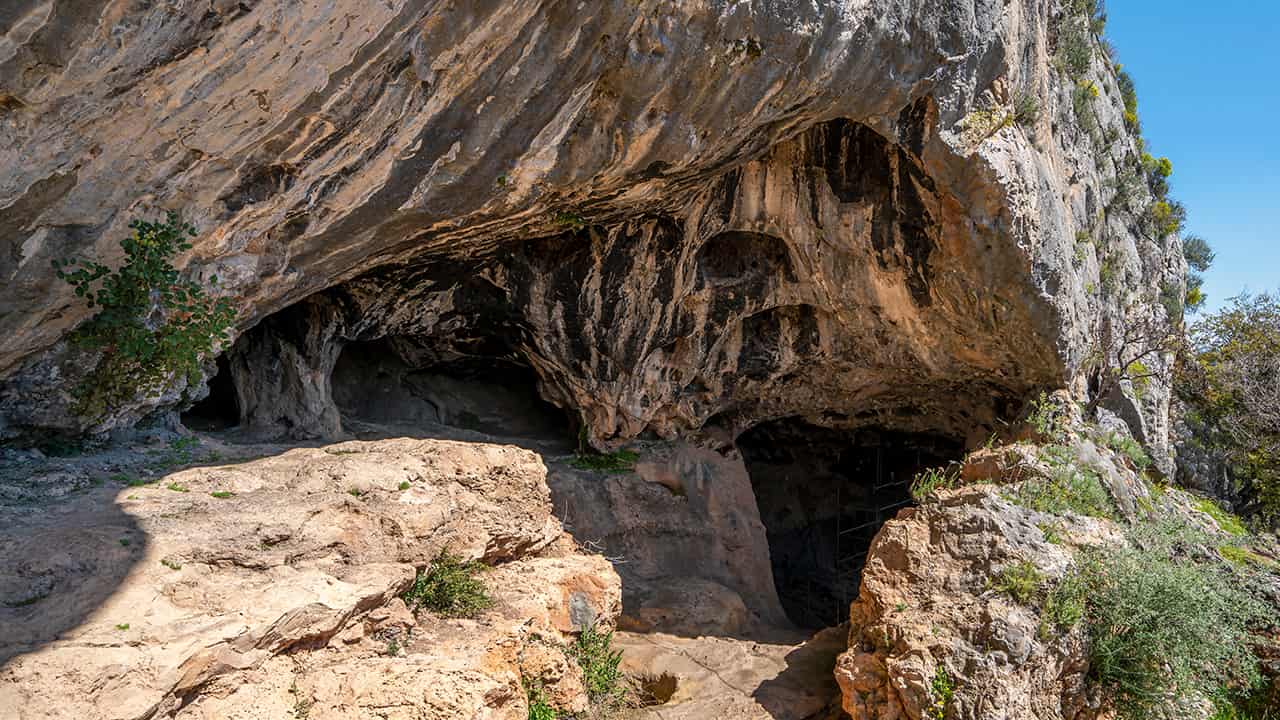 Karain Cave, included in the UNESCO World Heritage Tentative List, is one of the largest natural caves in Türkiye. This natural wonder, located within the borders of Antalya, actually took its present form with the merging of several caves. Karain Cave offers very valuable information to visitors with its history starting from the Paleolithic Age, which is a very early period of humanity. Karain Cave is the only place in the territory of Türkiye where Neanderthal humans have been proven to have lived. With this feature, the cave is a very important archaeological settlement. It was inhabited continuously in later periods due to the suitability of natural conditions and was turned into a religious center during the Roman Period. Among the finds unearthed in the cave are the bones of animals such as giraffe, hippopotamus, lion, and elephant, as well as pottery and stone tools.

Today, you can see these finds in the Karain Museum near the cave and in the Antalya Museum. The unique value of Karain Cave, which sheds light on the past of humanity, is waiting to impress its visitors with its nature and history. Click here for more information about Karain Cave. 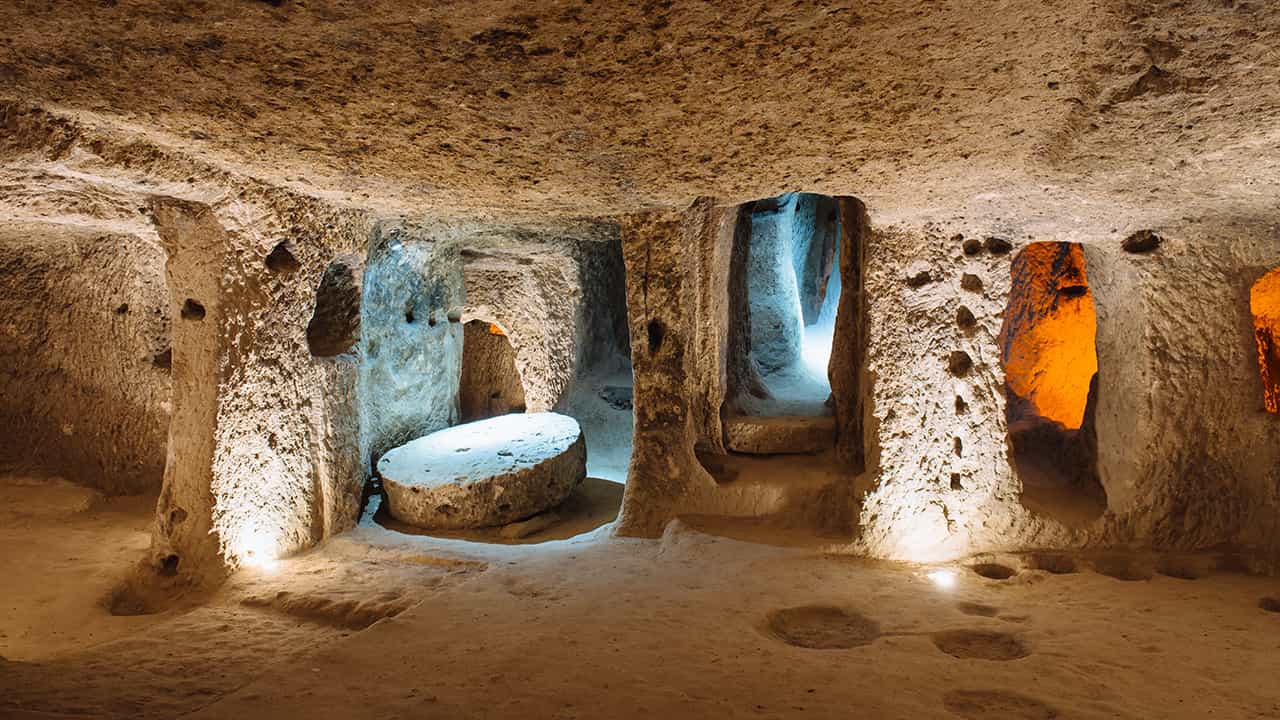 One of the most impressive cultural heritage of the Cappadocia Region is the underground settlements carved into soft tuff rocks. Derinkuyu Underground City is one of the largest and deepest of these settlements. This underground city is 85 meters deep and consists of 8 floors. Made up of rooms connected by narrow tunnels, the city provided a safe living space for many civilizations throughout history. The first settlement in Derinkuyu dates back to the Assyrian colonies. In the second century, the first Christians who escaped from the oppression of the Roman Empire came to Cappadocia and settled here. Derinkuyu Underground City has many areas such as a barn, well, cellar, winery, dining hall, and church. The missionary school, located on the second floor of the city, is definitely worth seeing. In addition, the chimney systems used for natural ventilation are also very impressive from an architectural point of view. 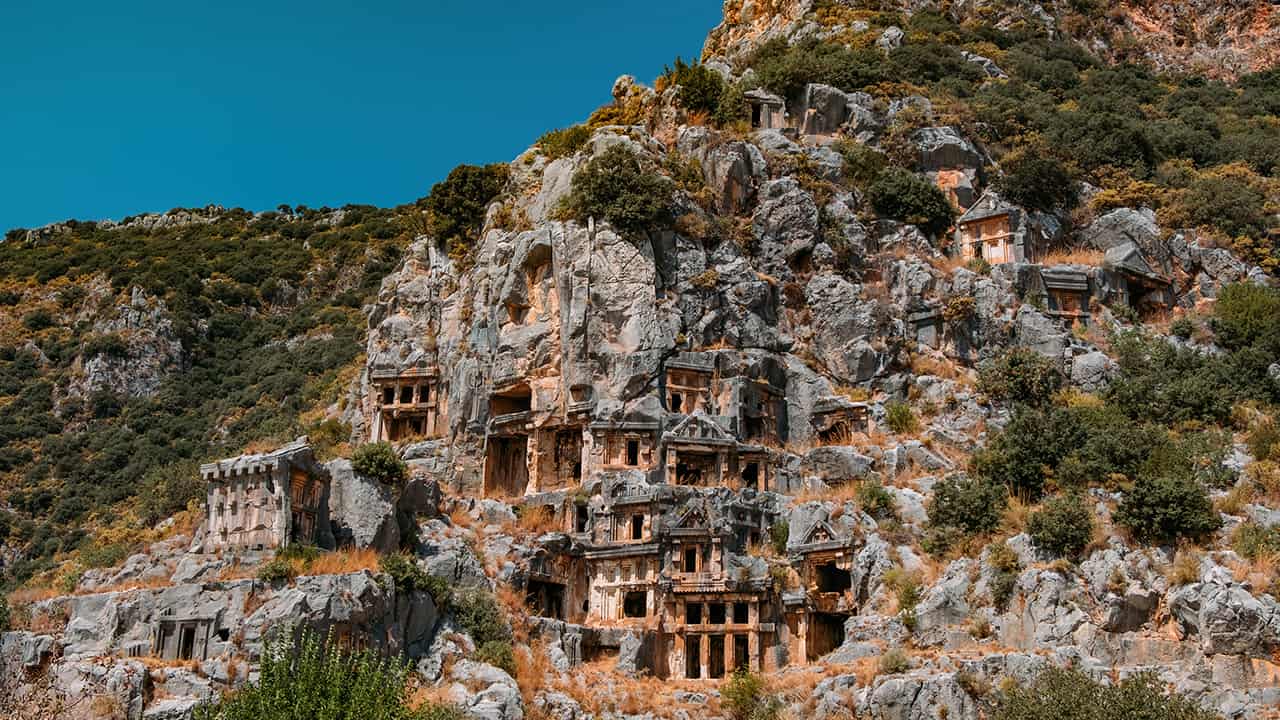 Myra, located within the borders of Antalya’s Demre province, is one of the earliest Lycian cities. The city,  an important center in the Hellenistic and Roman Periods, maintained its importance during the Byzantine rule. One of the first impressive structures of Myra is the magnificent Roman Theatre. This Roman period structure has a capacity of 10,000 people and is one of the best-preserved theaters of the Lycian Region. The interesting mask reliefs and mythological scenes in the theater give us very valuable information about the period. Another symbol of Myra is the Lycian Rock-cut Tombs. The reason for this is that the most beautiful examples of Lycian tombs are situated in Myra. Some of these tombs are on the rock just behind the theater and some are located in what is known as the river necropolis. One of the most interesting examples among these tombs is the relief tomb depicting the dead and their relatives. The view of the rock tombs that the Lycians built with inspiration from the wooden house architecture is truly fascinating.

The city offers a magnificent view to its visitors, especially with the theater and the rock tombs in its background. Click here for more information about Myra Archaeological Site.