In the Mediterranian Region, there is a region called the Lakes Region, named after the various lakes it is occupied by. This region, called Pisidia in ancient times, is home to many ancient cities of fascinating beauty, large and small. Sagalassos is only one of these ancient cities and is located within the borders of Burdur in the present times. Let's get to know Sagalassos a little better, which is on the UNESCO World Heritage Tentative List!

Hellenistic culture began to influence this city heavily after the reign of Alexander the Great began in 333 BC. The city was included in the Roman Empire in 25 BC and gained more importance as it became the capital of the Pisidia province in the following years. Of course, being an important city of the Roman Empire, the city was donned with opulent buildings and unique works of monumental nature. The ancient city, which has survived as one of the most striking parts of the common heritage of humanity, bears the traces of all this historical and cultural accumulation.

Sagalassos is a city where the natural resources provide safety for, being located on the steep hillside of the West Taurus Mountains, overlooking the Ağlasun Valley. In addition, the springs formed by the snow waters coming from the mountains fed the region where the city was founded. This rich nature provided a great advantage for the people of Sagalassos.

That’s not the end of our information on Sagalassos. It is not surprising that the Pisidians, who appear in historical sources as a freedom-loving and warlike people, chose a place like Sagalassos, which is literally on the "peaks". Now, if you want, let's take a look at the must-see works of this city, which overlooked the whole world when it was active.

To have a clearer idea of what to expect during your Sagalassos visit, you can also watch “Uncovering: Sagalassos” on our Turkish Museums YouTube channel.

What Can You Expect to See in Sagalassos Ancient City? 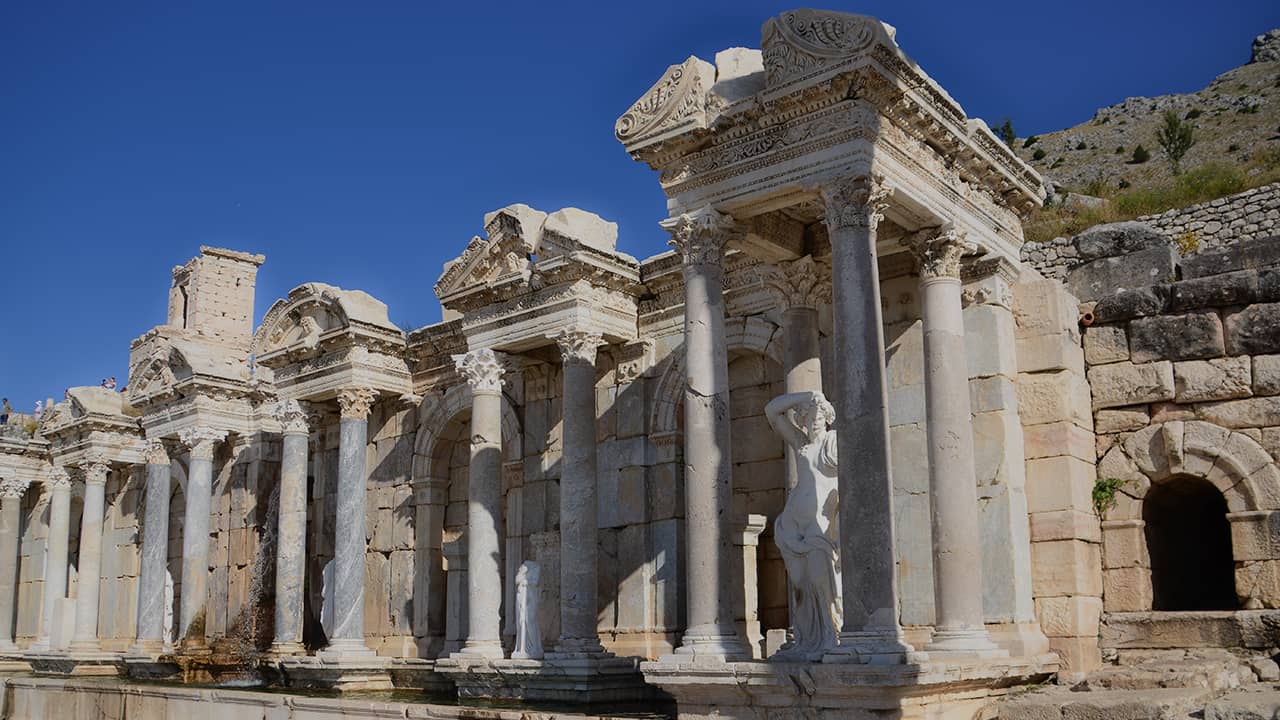 This fountain, which is a magnificent monument built between 161-180 AD, draws attention with the use of 7 different colored stones used in its construction and Afyon marble, which creates impressive games of light when it meets the water. The fountain, which was built as a badge of prestige during the Roman Empire; is a truly magnificent structure with its dimensions, sculptures in niches and waterfalls. You should definitely see the fountain, which continues to beautify the upper agora of the city, just like 1800 years ago, thanks to the recent restoration works. 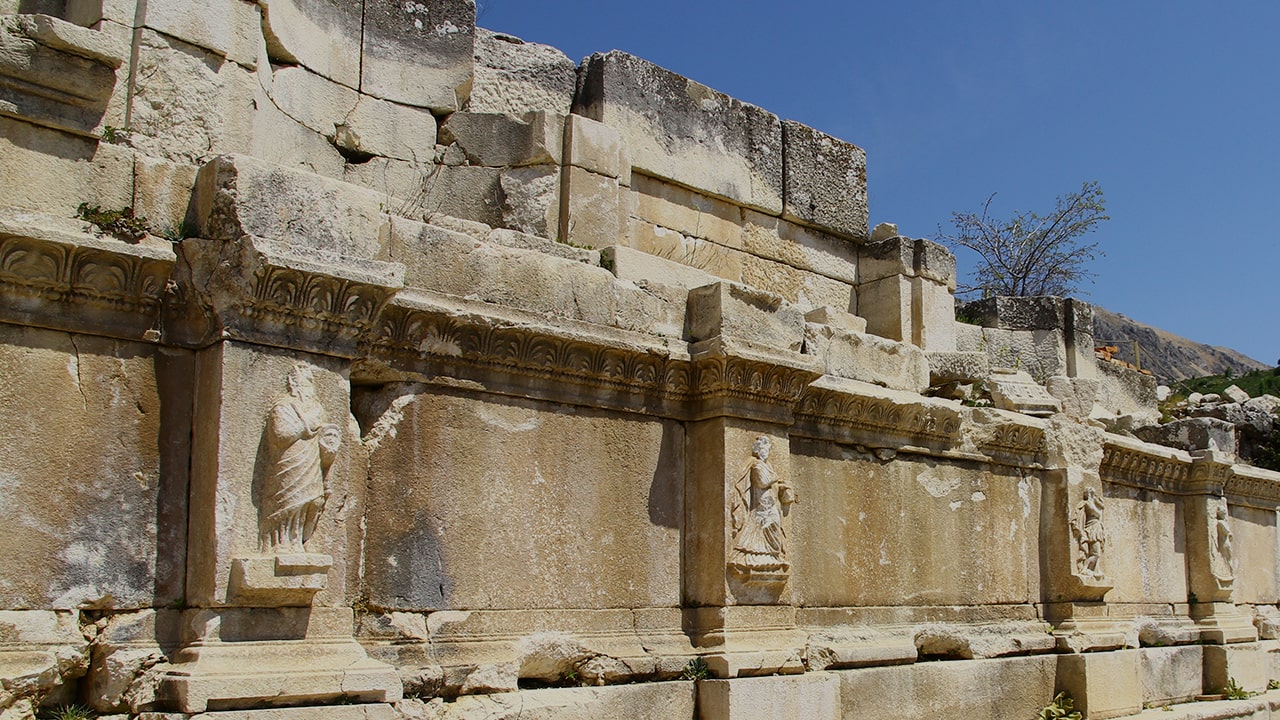 The ruins of this fountain, which was built to honor the Roman Emperor Hadrian, who made a great contribution to the development of the city by declaring Sagalassos the capital of Pisidia, are also among the structures worth seeing in the city. Even though only a certain part of it has survived to our days, the magnificent two-story fountain located at the end of the colonnaded street of the city is an impressive monument today as it was in the ancient times. 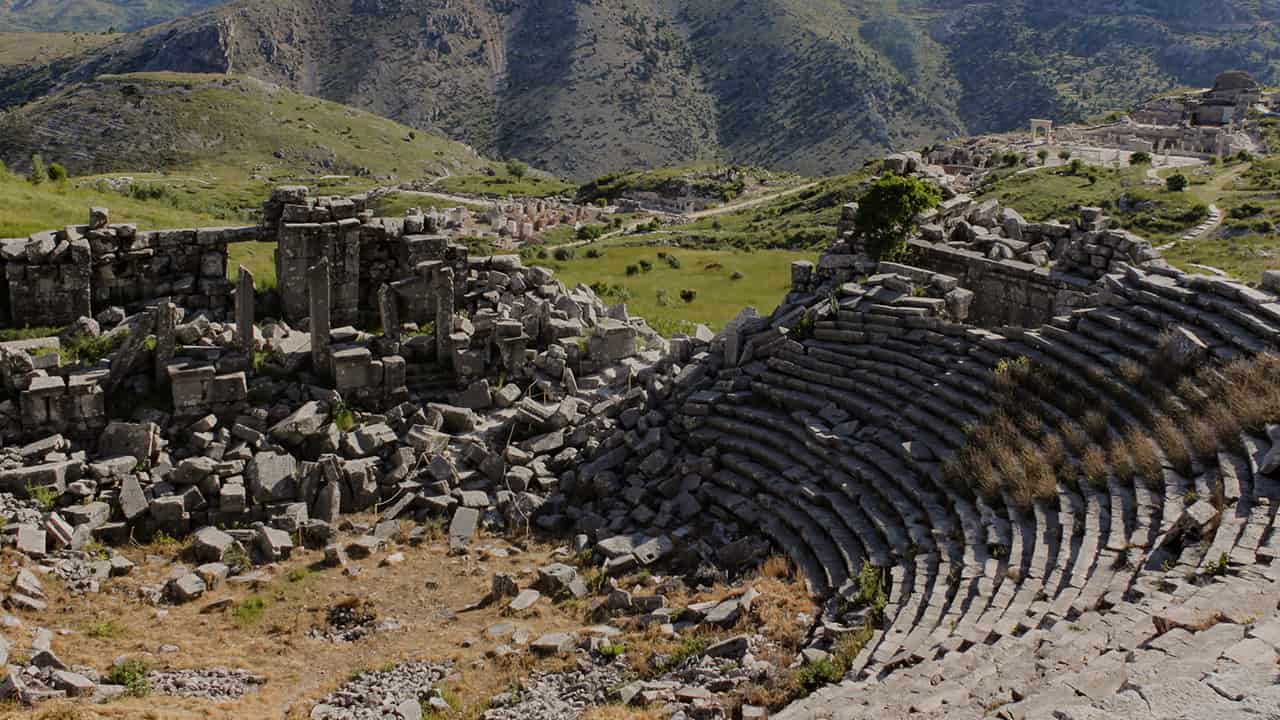 The theatre of Sagalassos, with a capacity of 9000 people, is a place at an altitude of 1600 m, with an almost frightening majestic view. The view from this maybe one-of-its-kind Roman theatre, for being built up so high, is breathtaking.  It is nearly impossible not to think about the ancient times and the ancient performances, and their ritualistic nature put on a show here. The theatre of Sagalassos, the city on the peaks, is a sufficient reason to visit the ancient city with its scenery and the feelings it evokes. 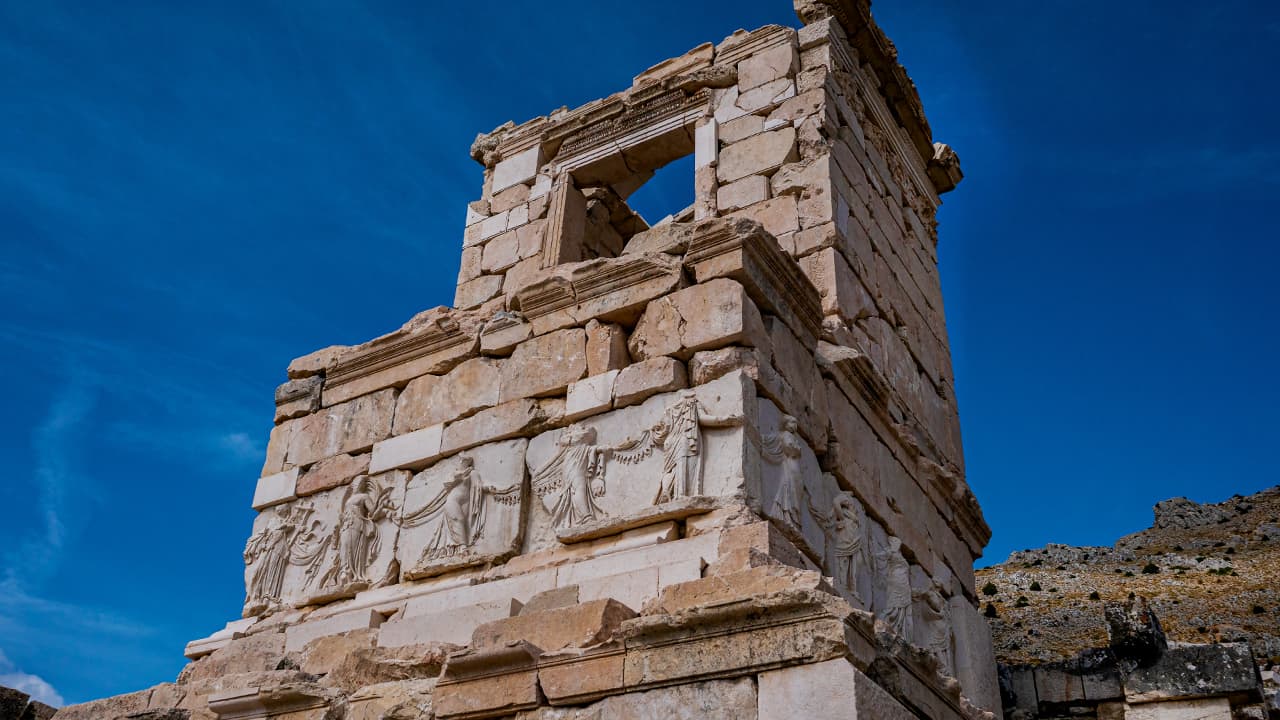 To whom this structure, which is thought to be built around 1st century AD, and which resembles a tower with its towering 15m height, was built is unknown. Heroons are typically monuments built to honor a hero and their deeds. Although it is unknown who this Heroon in Sagalassos is for, it is certain that whoever it was, was of great importance to the people of Sagalassos. Besides its monumental appearance, the building also draws attention to the reliefs of dancing girls, which are probably related to the Cult of Dionysus. Today, you can see the original reliefs live, in Burdur Museum.

The buildings you can see in Sagalassos, the capital of ancient Pisidia, are of course not limited to these. In the ancient city; it is possible to see the remains of many buildings such as the parliament building, the Odeon, the Roman Bath of the imperial period, the Doric temple, and the city mansion. There is also a potters' neighborhood in the ancient city, which is known to be a very important ceramic production center of its time.