The ancient city of Assos is an outstanding Greek city in Çanakkale, with its Athena temple on the Acropolis, its well-preserved fortification walls,  and its harbor (to name a few). The most important reason for the Greeks to choose the location of the city was that it was the only port in the Edremit Bay that the ships could take shelter against the northern winds. In ancient times, Assos was famous for its andesite sarcophagi and during the Roman Imperial Period, these sarcophagi were in demand all over the Mediterranean region from Egypt to Southern Italy.

With its ancient ruins, blue seas, restaurants, campsites, and hotels, Assos fulfills the wishes of visitors of all ages according to Excavation Director Prof. Dr. Nurettin Arslan. The history is also fascinating! “One of the most important figures of the city of Assos is undoubtedly Aristotle, who came to Assos from Athens with other students of Plato in 347 BC. Aristotle and other philosophers established a second academy in Assos after Athens and operated it for three years. Saint Paul’s arrival to Assos, which is one of his stops on the cruise on Lesbos in 57 AD told in the Bible, is very important for the city’s history.” he explained.

Check out our interview with Prof. Dr. Arslan to find out more about the wonders that await you at the ancient city of Assos.

Assos, included in the UNESCO Tentative List of World Heritage, is located in the historical Behramkale Village of Çanakkale. The ancient city of Assos is situated on an extinct volcanic hill at an altitude of 238 meters from the sea level. For this reason, andesite, a type of volcanic stone, was used in most architectural structures seen in Assos today. The city fascinates visitors with its unique architectural structures and has been inhabited since the Bronze Age. The region was a cradle of many civilizations. Aristotle lived in Assos between 347 - 345 BC and founded a philosophy school there. Assos was visited by St.Paul in 56 - 57 AD and was one of the first Western Anatolian cities to convert to Christianity. The city did not lose its importance thanks to its location during the Byzantine Period and continued to be a residential area in the Ottoman Period as well. 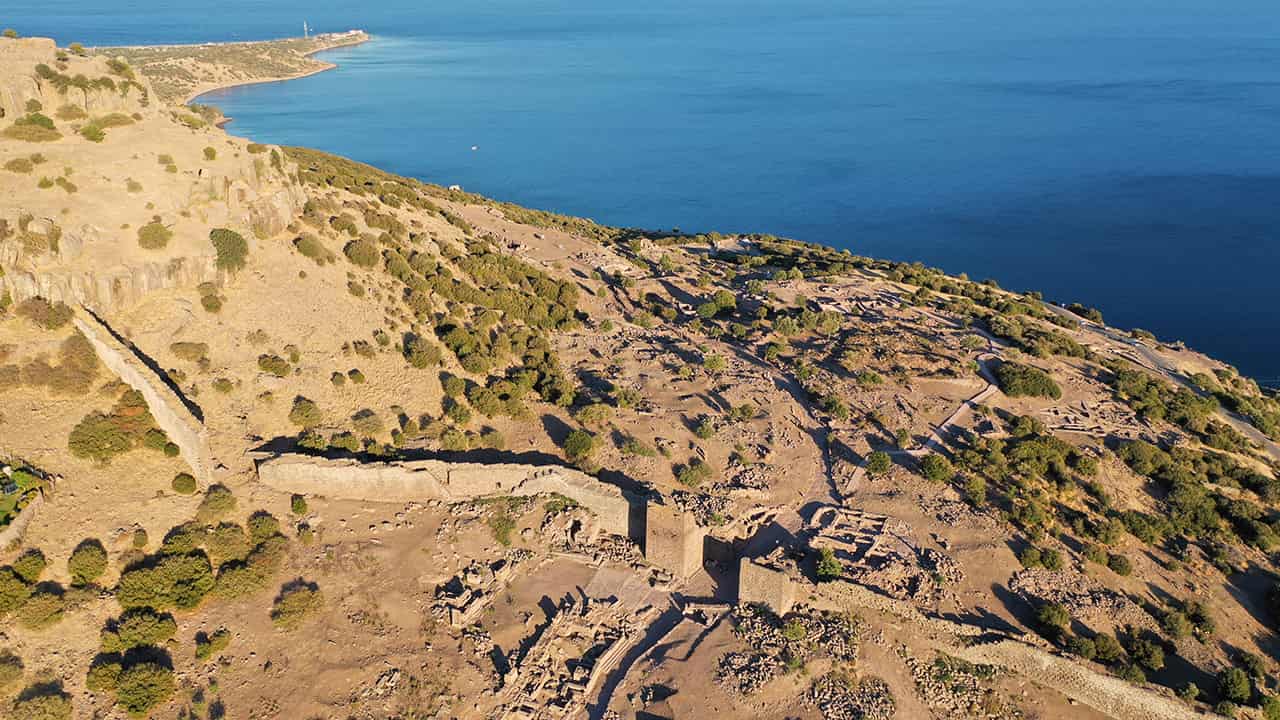 The location of the ancient city, its architectural structures, and their connection with nature are exceptional. Another striking point of Assos is the acropolis at the highest point of the city. A very important architectural structure in the acropolis, which is the most visible and prominent point of the city, is the Temple of Athena. This structure was built by using andesite stone in the Archaic period and is the only Doric temple in Anatolia. The Temple of Athena, with its magnificent view and location, is as breathtaking today as it was in ancient times. The city is surrounded by a well-preserved fortification wall 12 m high and 3100 m long, located on the terraces below. Agora, gymnasium, bouleuterion (council building), theater, and necropolis are lined up as you descend from the top from the sea. The andesite sarcophagi found in the necropolis are definitely worth seeing. The port at the bottom made the city an important trade center in ancient times.

When you visit this historical site today, you can watch the sunset at the Temple of Athena in the acropolis, and explore the other structures of the city. You can visit some of the friezes in the Temple of Athena and the artifacts found in the ancient city at the Troy Museum. Do not forget to see the tomb findings unearthed from the Assos Necropolis in the museum.