The Duel of Two Architects: A Legend of Aspendos

Antalya: A fantastic Mediterranean city for the adventurers and lovers of nature, culture, and history with its golden beaches, crystal-clear waters, epic ancient ruins, and historical monuments shedding light on the past… There are numerous ancient cities worth seeing in Antalya but perhaps among them the one that comes to our mind is Aspendos with its glamorous beauty. Aspendos is generally known for its spectacular ancient theatre, still hosting prominent cultural events. The city has another ancient landmark having a magnificent architectural and engineering plan, as the theatre: The aqueduct, dated to the Roman Period. You may know these two architectural marvels if you visited Aspendos or researched the city but have you ever heard that these two landmarks were built as a result of a duel? In this article, we take you to the Roman Period, to the duel of two architects, to uncover a rarely known ancient Aspendos legend.

Aspendos is home to one of the best-preserved Roman theatres not only in Türkiye but also in the entire Mediterranean world. The Aspendos Amphitheatre is remarkably big: It was built to host approximately 15.000 of the audience. If we think about the average number of inhabitants of the ancient cities in the Roman Period, this audience capacity is really impressive, isn’t it? What is also impressive about the theatre is its truly magnificent acoustic system, competing with modern equivalents, thanks to very successful architectural planning. The inscriptions found in the Aspendos Amphitheatre demonstrate that this amazing landmark was the work of an architect named Zenon. 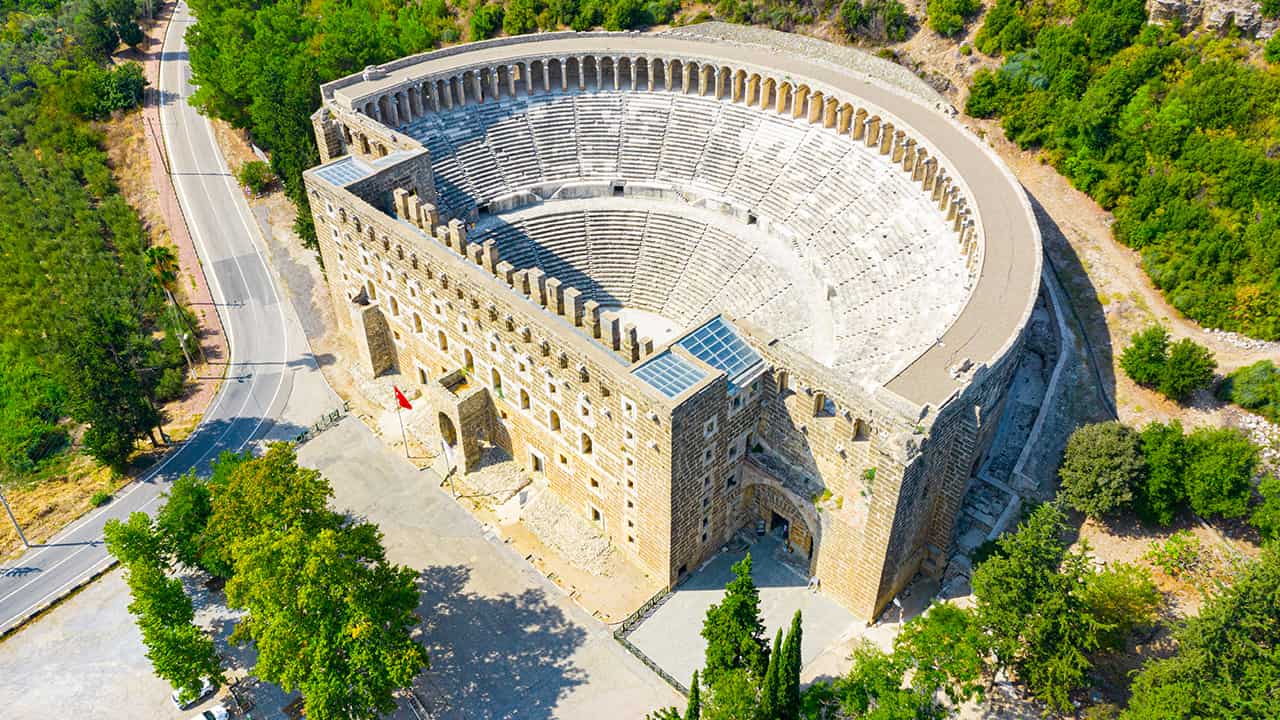 An Architectural Marvel: The Aspendos Aqueduct

Theatre is not the only landmark of Aspendos; the ancient city hosts another architectural marvel: The aqueduct. Some parts of this aqueduct of rare beauty have survived to the present day. This magnificent water bridge, located in the northwest of the city, was built to meet the city’s needs for freshwater. The aqueduct was planned to reduce the intensity of water coming from 25 kilometers away from the city and distribute it to the inhabitants. The architect of this marvel is surprising though; it is narrated that the aqueduct was planned and built by the brother of Zenon who was an architect like himself.

These two magnificent structures bearing the signature of two architect brothers mirror the importance, magnitude, and grandeur of Aspendos. However, the question of why and how two architect brothers had at constructing these monumental structures come to one’s mind. Were these architectural marvels built just for the need of the crowded ancient city or is there an interesting hidden story behind them?

As we may know, there are limitless legends, myths, and stories about antiquity. There is also a legendary one about Aspendos. It is narrated that these two architectural marvels, competing with each other in beauty for thousands of years, were actually built as a result of a duel of two lovers who challenged each other in ancient times.

According to the legend, the King of Aspendos announces that he will let his daughter marry the man who undersigns the most functional work for the city’s inhabitants. Soon after, many people set about doing their best for their city. In this competition, two brother architects step forward with the aqueduct and theatre they constructed. Here, their rivalry begins.

The king visits the aqueduct first. The monumental structure is both beautiful and functional. The aqueduct, bringing water from kilometers far and meeting the city’s water needs win his approval. He thinks to marry his daughter to its architect. However, as a king, he has to make a fair decision. Even though he was fascinated by this magnificent structure, he sets off to see the theatre.

The theatre is so amazing. The monumental architecture and the revolutionary acoustic system of the theatre excite the king. The voice of a coin drop can be heard when seated on backbenches. According to the legend, this amazing acoustic system changes the king’s decision.

As says, when the king is walking through the backbenches, he hears a soft whisper. He clearly understands that someone says the following: “You should let your daughter marry me.” He turns his face to the stage and he sees the architect of the theatre. He whispers to him from the stage, and the king clearly understands each word. It is obvious, this theatre may echo the voice of Aspendos. He is very impressed, he changed his decision and declares that he will marry his daughter to Zenon, the architect of this magnificent theatre.

Mighty as ever, these two landmarks of Aspendos are still standing. The magnificent theatre, carrying the voice of Aspendos far away, continues to host prominent concerts and cultural events, even today. The rivalry ended with the decision of the king but it seems that these two monumental buildings are still challenging each other in beauty. Now it is your turn: What do you think, did the king make the right decision? Which one would you choose if you were in his shoes?

In order to answer those questions, it would be best to come and see these two ancient landmarks in situ! Aspendos that has been referred to in many legends awaits you to come and uncover its mysteries.