The territory of Türkiye has witnessed some of the turning points in the history of humanity as well as hosting many various communities for millennia. Our knowledge about the history of humanity shows us that people, during their struggle for life as hunter-gatherer societies, found a way to use natural resources far more effectively by developing agriculture over time, began to develop complex social relations, and organize in the form of states. It is obvious that the territory of Türkiye witnessed this transformation and conserved some structures or artifacts from those days, bringing them to the present. Among them is Arslantepe Mound, an archaeological site recently inscribed on Türkiye's UNESCO World Heritage List. Let's explore this archaeological site together, discovering the signs of the first days when people organized as a state in the world.

The First City-State of Anatolia

Arslantepe, a 30 m high mound located around 7 km east of Malatya, is home to remains found in layers dating from 5000 BC to the 11th century. Particularly, the finds in the layers dating to 3000 BC brought to light the early traces of the development of humanity as a complex social organization, establishing a state, before the era of written documents. The palace structure and many seals unearthed in Arslantepe, dated to 3300-3000 BC, proved that Arslantepe was an administrative and commercial center.  In addition, the world's first known swords were found in Arslantepe, where the oldest settlement dates back to the Chalcolithic Age. According to Hittite sources, the city was called Malitiya at that time. Arslantepe is thought to be the first city-state in Anatolia.

Converted into an open-air museum, the Arslantepe Mound is also home to the remains of the mudbrick palace and temple complex, dating to the Uruk Period in the 4th millennium BC; Lion sculptures made in the Neo-Hittite period, the statue of the Hittite King Tarhunza, and carved blocks bearing various figures and symbols belonging to that period.

As there was no museum in Malatya at that time, the originals of these artifacts were taken to the Anatolian Civilizations Museum in Ankara. The artifacts are still displayed there, however, replicas made of the same material are exhibited at the entrance of the Arslantepe Open Air Museum. In the open-air museum, we can explore the remains of a structure thought to be a king's tomb, and dated to 2900 BC with the remains of four people who were probably sacrificed on the stone cover of the tomb. 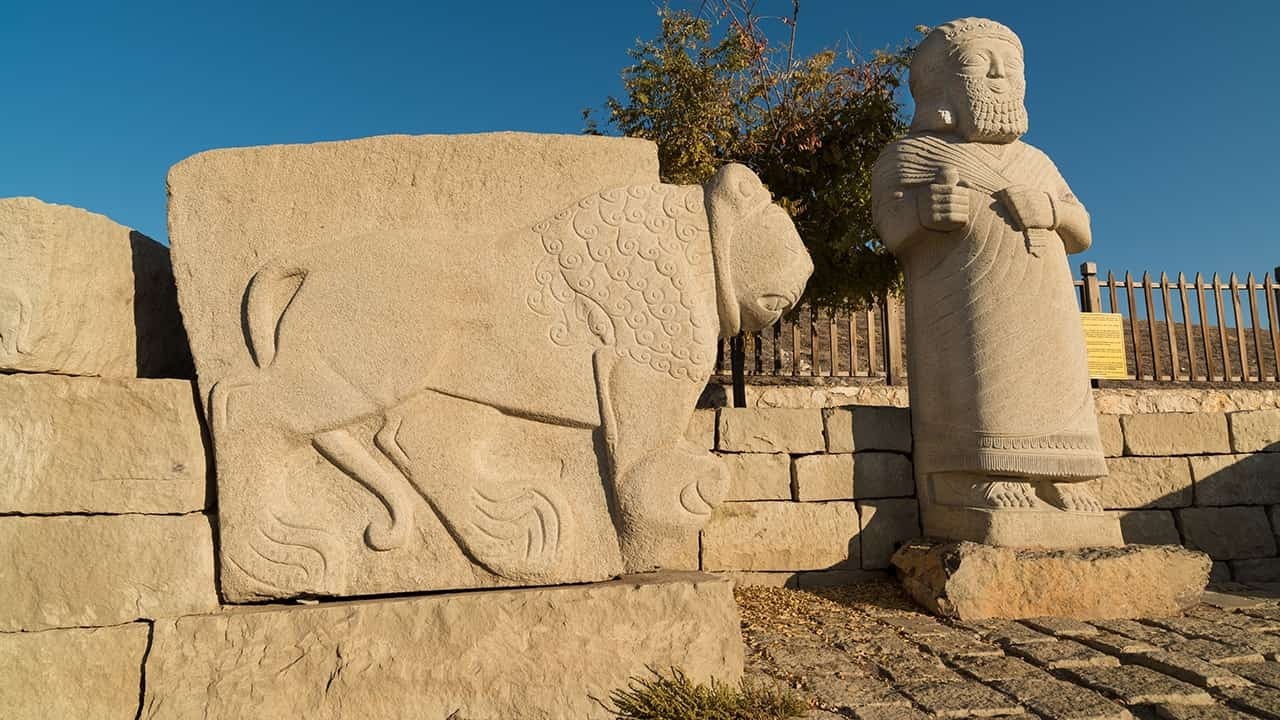 Many artifacts belonging to the Chalcolithic Age and the Old Bronze Age, found in the Arslantepe archaeological site cannot be preserved in the open-air museum. These artifacts await their visitors at the Malatya Museum. During your visit to Malatya, we recommend you to visit the Malatya Museum together with Arslantepe.

In the museum, you can also explore an original, well-preserved tomb dating back to 4000 BC as a unique example of the burial tradition in Anatolia, with ornaments and kitchen utensils presumed to belong to the woman in the tomb.

Among the remarkable artifacts displayed in the Malatya Museum are, also, swords and spearheads found together in the Old Bronze Age (3200-3000 BC) layer during the archaeological excavations in Arslantepe. With their matchless forms and production techniques for their period, these artifacts, made of arsenic alloy and some of them inlaid with silver, are quite outstanding from an archaeological viewpoint.  Another must-see set of finds in the Malatya Museum are the impression seals found in a small place near the palace structure in Arslantepe. These impressions are considered as the remains of the oldest accounting system and bureaucratic order in the world.

Inscribed on the UNESCO World Heritage List in 2021, Arslantepe is worth visiting, making visible the roots of today's civilization, and one of the most important turning points in the history of humanity. In addition to this unique cultural asset, you can also take a look at our article “City Guide: Malatya” in order to learn about other places worth visiting in Malatya with many valuable traces from the common heritage of humanity.