Türkiye's UNESCO Sites - The City of Love and Beauty: Aphrodisias

Türkiye is home to many significant sites that shaped the history of mankind. 18 of those are on the UNESCO World Heritage List. They each have their own unique stories that we are actively exploring with you on our Turkish Museums platforms. One such story includes renowned photojournalist Ara Güler. His iconic photography captured the spirit of a generation, and he traveled the world to photograph influential figures such as Winston Churchill, Alfred Hitchcock, Salvador Dali and Picasso, among others.

Lost during an assignment in Aydın, Ara Güler stumbled upon a village where he was astonished to find locals living alongside priceless Roman relics. The photographs that he took there in 1958 led to the discovery of the lost Ancient City of Aphrodisias. Of course, locals knew about the ancient city. But these photographs brought national and international attention to the archaeological site. Experts soon uncovered a well-preserved archaeological site with many stunning structures.

THE CITY OF LOVE AND BEAUTY 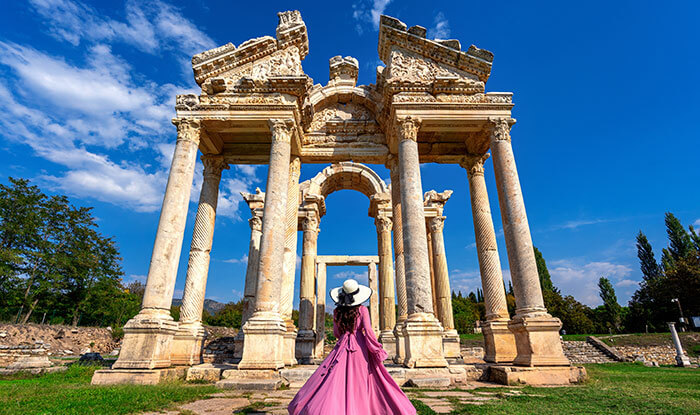 The ancient city was named after the goddess Aphrodite and was known for the Temple of Aphrodite and the stunning statue of the goddess on display at the temple. This version of Aphrodite blended the Hellenic goddess of love with the archaic Anatolian fertility goddess. This unique cult image was found elsewhere in the Mediterranean as well, indicating the regional importance of this temple. The Temple of Aphrodite was built in the 3rd century BC and was always the heart and soul of the community. The temple was converted into a church around 500 AD and was in use until the Seljuk conquest of the region in 1200 AD.

THE MARBLE CAPITAL OF THE REGION 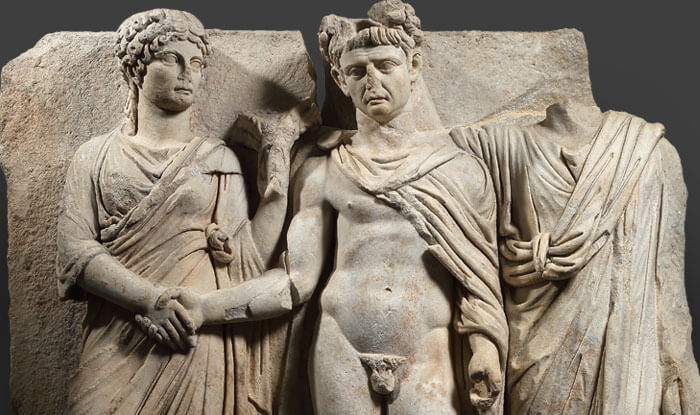 In ancient times, Aphrodisias was actually quite famous for its expert sculptors, high-quality marble statues and an important sculpture workshop that was uncovered during excavations. Marble quarries near the city were an important factor in Aphrodisias becoming a leading center of arts.

In the 4th-6th centuries AD, Aphrodisian sculptors were in high demand to produce marble busts and statues for important individuals in the Roman Empire. Their products were considered the best marble statues of the time, and were displayed in major cities such as Rome, Constantinople, Sardis, Laodikeia and Stratonikeia. Surviving works of Aphrodisian sculptors include Hadrian’s Villa at Tivoli.

Artifacts from this era such as sarcophagi with statues and reliefs are on display at the Aphrodisias Museum, located at the entrance of the archaeological site. But the outstanding marble work is also visible in the architecture of the ancient city itself. 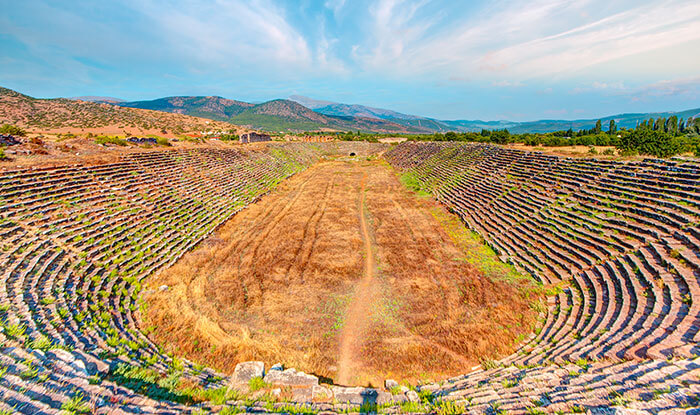 Another historic gem at the archaeological site is the best-preserved stadium of the ancient world with an impressive seating capacity of 30,000 spectators.The size of the stadium is significant, given that the ancient city had a population of around 10,000. The 270-meter long stadium is also one of the largest in the world.

The stadium stands out with its architectural form, as it has two curved ends forming an ellipse. As a result, spectators seated in this section would not block each other’s view and could easily see the rest of the arena. The stadium was used to host traditional athletic events such as: foot races, long jumping, discus & javelin throwing and wrestling. Gladiator combats were also held here. Competitors would enter the stadium using tunnels under the seats of both short ends. In late antiquity, the east side of the structure was converted into an amphitheater.

Inscriptions carved into the seats offer insight into the spectators as well. There are several spaces reserved for associations (such as tanners and goldsmiths) and even specific wealthy individuals from Aphrodisias and the neighboring city of Antioch on the Maender.

Looking at the stadium today, it’s hard not to compare it to the modern-day sports arenas and stadiums. The resemblance is uncanny!

MUCH MORE TO EXPLORE 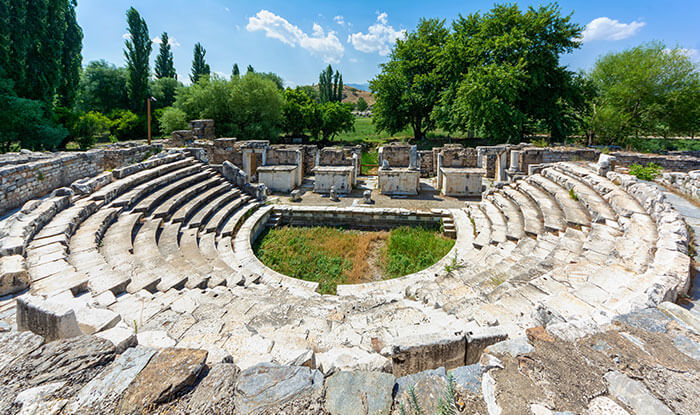 The Archaeological Site of Aphrodisias offers visitors a rich selection of buildings to explore. The Bouleuterion (or council house) is another must-see structure during your visit. The covered auditorium used for political activities was built in the heart of the city. The stage where people would speak to the audience is backed by columns and statues of important local figures, many of which are preserved today. Only the front 9 rows of the structure remain today, but adding up the back rows as well, the Bouleuterion had marble seating for approximately 1,700 people.